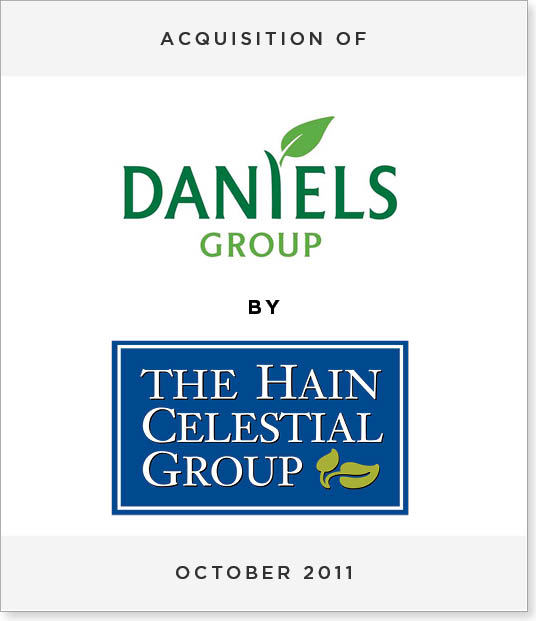 Spayne Lindsay, the independent financial advisory firm specialising in the international food and retail sectors, acted as sole adviser to The Hain Celestial Group, Inc. in its acquisition of Daniels Group from Singapore Airport Terminal Services, a global food service company, for consideration of approximately $230 million. Sales for Daniels were £177m in the year to March 2011.

Hain Celestial is a $1.4 billion NASDAQ-listed business, led by President and Chief Executive, Irwin Simon, and a leading natural and organic products company with operations in North America and Europe. It has been providing “A Healthy Way of Life™” since 1993 and its brands in the UK include Linda McCartney’s frozen vegetarian foods while in the US it is an established player, with household brands including Celestial Seasonings (tea), Terra Chips (savory snacks) and Earth’s Best (organic baby food).

Daniels Group will be a major development for Hain Celestial’s European operations. The deal builds on European acquisitions made earlier in this year of Danival (organic foods) in France and GG UniqueFiber (natural high fibre bakery products) in Finland.

The acquisition transforms Hain Celestial’s position in the UK and European food industry, giving it scale, increased customer relevance, a strong management team as well as high visibility brands which fit well with Hain Celestial’s healthy, natural food positioning. There are real synergies with Hain Celestial’s existing business and the acquisition provides a platform with major UK retailers for its international brands such as Celestial, Terra and Earth’s Best. It gives Hain Celestial established access to the £45 billion chilled and fresh food sector which is growing fast, at around 5% per annum. The chilled sector, where the UK is seen as a leader, has recently seen deals including Boparan’s acquisition of Northern Foods and Uniq’s sale to Greencore.

The mandate follows an active year for the specialist investment bank which has so far handled five deals, including advising Uniq on its sale to Greencore, Unilever on the disposals of its Ragu and Chicken Tonight brands, Exponent on its acquisition of Quorn, Raisio on its purchase of Big Bear Group and Mitsui on the sale of its microwaveable rice business to Marbour of France.